Determining the Number, Size and Location of Fire Extinguishers Required

This page explains the number, size and location of fire extinguishers required throughout a condo building in Chicago. Each of the "building areas" detailed below has specific fire protection requirements and each corresponds to a matching area listed in our Fire Safety Cost Estimator tool.

Use the information below to complete the Fire Safety Cost Estimator tool, which will determine the cost required to fully service your property. This information will also help you understand the number of additional fire extinguishers, if any, that are needed to bring your building up-to-code.

Click any of the topics below to view more details.

In general, a condo building needs a minimum of one fire extinguisher on each floor of the building. This includes the first floor, or lobby floor, of the property. The number of extinguishers required on a specific floor is dependent on the length of the hallway or common area. The law requires that from any point on the floor, a person must be able to access a fire extinguisher in 75 feet or less.

Some smaller buildings and those with multiple tiers have a different layout consisting not of hallways, but of an interior staircase with landings. As detailed in the last example (below) a slightly different approach is used in these situations to minimize the number of extinguishers needed without compromising on fire protection.

Most floors require only a single extinguisher to provide the required level of protection. As shown in the example below, the extinguisher is installed next to the primary exit ways, and is within the 75 foot maximum travel distance from any point on the floor.

In this final example, we will review a common configuration found in many smaller buildings and those with multiple tiers. Instead of a building consisting of multiple floors, with each floor having a long hallway with entrance doors for the units, these buildings consist primarily of an interior stairwell with multiple landings. Stated differently, the common area in the building or specific tier is made up of only a stair system.

In the example diagram below, there is a small landing consisting of the front entrance doors to two units, followed by a short set of stairs leading to an empty landing, which then leads upwards on an additional set of stairs to the next landing containing two unit entrance doors. This pattern may repeat depending on the height of the building or tier.

If empty landings do not exist, each landing with entrance doors will likely need an extinguisher. This is to avoid residents needing to travel a full flight of stairs in order to locate an extinguisher. 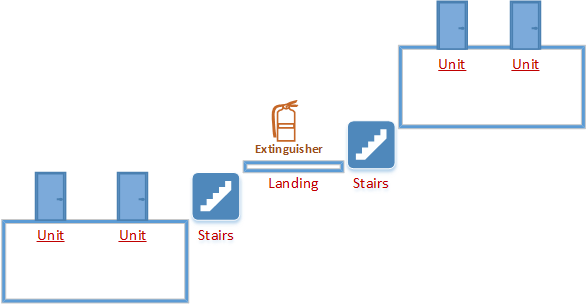 If your building has an elevator, the associated elevator maintenance room requires its own 10lb extinguisher, independent of any other extinguishers on the premises, even those nearby.

Similar to the normal floors of your building, the number of extinguishers required in your basement and garage depends on the “75 foot maximum travel distance” rule that was discussed earlier. For basements and garages, however, 10lb fire extinguishers are typically recommended due to the amount of square footage being protected. (If you have two separate garages, each should have its own extinguisher protection)

You must walk the area and calculate the number of extinguishers required to meet to the 75 foot maximum travel distance rule. From any point, you must be able to access an extinguisher in 75 feet or less. See the follow diagram for a sample basement.

If your building has additional common areas such as a laundry room or mechanical room, an extinguisher should be installed in each. Typically a 10lb unit will be used in these areas.