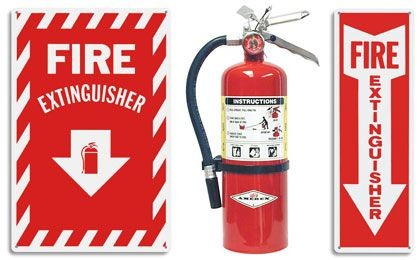 It is not uncommon to see fire extinguishers in homes, businesses and public places. The (typically) red, cylindrical device is ubiquitous in our world, sometimes encased behind safety glass.

But how much do we actually know about them? If faced with a fire, would you know how to correctly operate a fire extinguisher under duress?

The reality is that there are many different types of fire extinguishers with different uses. Utilizing the wrong type of extinguisher in a fire situation can be deadly.

Once you are familiar with the fire extinguishers in your home or workplace, using them is relatively straightforward. Simply pull the pin, aim toward the fire, squeeze the lever and spray the discharge side to side, covering the entire surface area of the fire.

Not all extinguishers work on all fires. Occasionally, a fire can reignite after being initally extinguished because the right type of extinguisher was not used. This can give someone a dangerous false sense of security. Also, the size and severity of fires that an extinguisher can put out tends to vary across products. Check your extinguisher's label and make sure you're familiar with its intended use.

As always, call 911 if the fire becomes too large to fight by yourself. Fire extinguishers are meant to assist you, not replace the role of a fireman. If a fire becomes too much to handle, get to safety and leave it to the professionals.

What is the NFPA?
Emergency Lighting and Your Safety